Chris Rodriguez
Director
-A +A 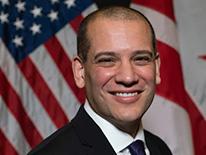 Dr. Christopher Rodriguez is the Director of the Homeland Security and Emergency Management Agency (HSEMA). In this role, Dr. Rodriguez serves as the Homeland Security Advisor and State Coordinating Officer for the District of Columbia. He also is the State Administrative Agent for all homeland security federal grants funding for the District and the National Capital Region which includes parts of Northern Virginia and Maryland. HSEMA is responsible for emergency planning, preparedness, response, and recovery for the City, including operations for a 24-hour emergency operations center and the Washington Regional Threat Analysis Center, the District’s intelligence fusion center.

Prior to HSEMA, Dr. Rodriguez served as Director of New Jersey’s Office of Homeland Security and Preparedness from 2014-17, where he led statewide strategies, policies, and operations on counterterrorism, resiliency, and cybersecurity. While serving in New Jersey, his home state, Dr. Rodriguez led the office during a national rise in homegrown violent extremism and established close relationships with the private sector and federal, state, and local law enforcement. Recognizing the critical role the public plays in stopping attacks before they happen, Dr. Rodriguez also increased the office’s engagement with the public—building and maintaining key relationships with faith-based communities.

Following the terrorist attacks of September 11, 2001, he joined the Central Intelligence Agency (CIA), where he became a senior analyst in its Counterterrorism Center. In this position, he monitored terrorist groups in the Middle East and South Asia, closely collaborating with U.S. Intelligence Community partners at the federal, state, and local levels to identify and counter persistent threats to the United States and its allies. During his time at the CIA, Dr. Rodriguez also oversaw an analytic unit that handled global economic and energy security, as well as related counterintelligence and cyber threats. From 2009-11, while deployed at the U.S. Embassy in Brussels, Dr. Rodriguez was a key U.S. interlocutor with the European Union during the height of the Euro crisis. He has been recognized by the CIA and Director of National Intelligence for his leadership and professional achievements.

Dr. Rodriguez received a BA from Williams College and an MA and PhD in political science from the University of Notre Dame.